In 1942, Bougainville was occupied by the Japanese, and was used as a base to attack Guadalcanal and other Allied territory.

The 3rd Marine Division landed on the west coast of Bougainville in November 1943, and shortly afterwards the Battle of Empress Augusta Bay was fought between cruisers and destroyers of the U.S. Navy and the Imperial Japanese Navy. 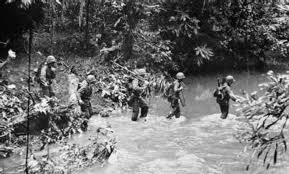 The Americans routed the Japanese and were never bothered again in this area by the I.J.N.

It took a concerted Allied land offensive between November 1943 and April 1944 to occupy and hold the part of the island along the western shore in an area called “Torokina”.

The Americans set about establishing a wide defensive perimeter, draining swamps, and building multiple airfields for defense, and for attacking the Japanese on New Britain Island.

The Marines were replaced by US Army troops.

The Japanese infiltrated the mountains and jungles of Bougainville, and launched a counteroffensive against the Americans in 1944. The critical focus of their attack was at a place called “Hellsapoppin Ridge” by the Americans.

In repulsing this attack, the American soldiers and airmen broke the back of the Japanese Army on Bougainville.

The survivors retreated to their bases on northern and southern Bougainville, and the Americans left them to “wither on the vine” for the remainder of the war.

During the 1943-45 period, more than 17,500 Japanese soldiers were either killed in combat, died of disease, or died of malnutrition

. In 1945, the Australian Army took over occupation from the Americans, and Australia resumed control of Bougainville and Papua New Guinea, which became a United Nations trusteeship.

The remaining Japanese on Bougainville refused to surrender, but rather held out until the surrender of the Japanese Empire on 2 September 1945.

They were then commanded by the Emperor to surrender to the Allied Australians, Americans, and New Zealanders, and they were then repatriated to Japan.