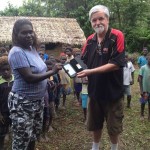 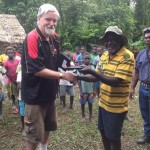 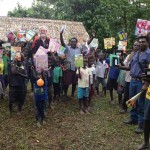 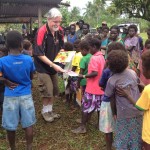 James Tanis Ex-President of Bougainville and founder of Narinai Elementary School in the Panguna District.

An Australian man, so affected by a trip to bring e-readers to students in a remote Panguna village, has launched an initiative to improve literacy throughout Bougainville.

Colin Cowell started the Book-Gain-Ville project in Australia with the support and guidance of the Indigenous Reading Project.

Cowell’s original visit with 20 kindles was to the Narinai Elementary School in the Panguna District, the home of former Bougainville president Mr. James Tanis. Here the Book-Gain-Ville project was launched and welcomed to the community with dancing, singing, speeches and slaughtering of two pigs to mark the importance of the occasion.

“Travelling around I saw broader need across the whole island, so we have added ten more sites for trial of the Book-Gain-Ville initiative,” Mr Cowell said.

“By the end of June 2014 we hope to have over fifty kindles in ten pilot schools and over the next few years I would like to see over one thousand kindles in Bougainville schools with the support of all the local level governments.”

Cowell, who hails from Canberra, Australia, has 24 years of experience working with and training Aboriginal communities across Australia and stated that the key to the Book-Gain-Ville project is sustainability.

“We now have in place at the Arawa Women’s Training Centre the support technology and trained staff to take this project forward in years to come,” Cowell said.

“Guiding this project on the ground is a leadership group lead by James Tanis and group of teachers and IT volunteers.”

“The Kindles with up to 1400 books inside cost $99.00 and a lot of communities including the pilot sites have already begun fundraising to buy extra kindle on top of our donations.”

Colin Cowell is no stranger to Bougainville having lived there some 40 years ago and return he spent the whole month of May travelling the length and breadth of the island.

He met his old friends like Linus kunokong from Buin and visited cultural shows in Siwai, South Bougainville; visited tourism development sites across the island and even participated in the Bougainville Remembrance Day, May 17, in Arawa.