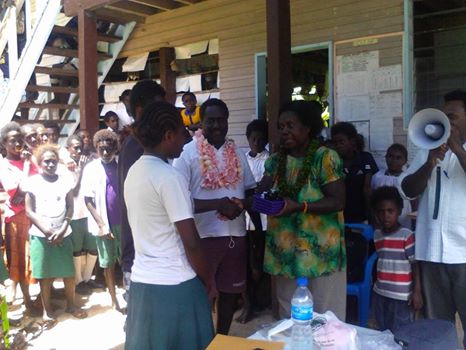 The team to Uruna was ccompanied by two visiting Japanese Linguists Professor Onishi and Dr Onagaki. 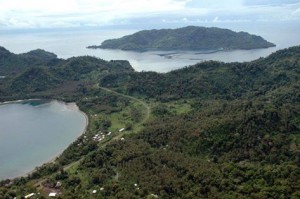 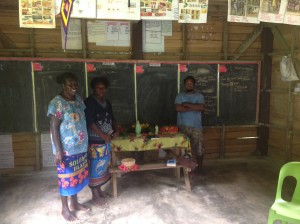 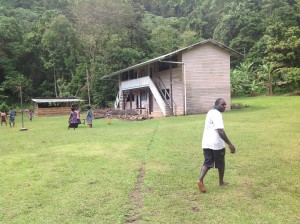 No of Students: TBA

We thank and acknowledge the kind donation of  6 Kindles from:

History of School: Our Thanks to Leonard Fong Roka and Bougainville 24

Though primary schools mushroom across Bougainville, it has become apparent that the population of children to attend these schools is shrinking.

The fluctuation in class sizes from year to year have proven to be a great challenge for many schools in the region.

A single 4-in-1 school on Pokpok Island has maneuvered through these setbacks and is thriving.

Out from Kieta and girt by the ever sparkling blue waters of the Solomon Sea is Pokpok Island’s only primary school, Uruna Primary School.

Uruna is a hamlet located at it northern-most end of Pokpok Island, where it faces the pre-war island resort of Arovo Island.

Uruna is home to one notable Bougainvillean who was once PNG’s chief ombudsman, national parliament clerk and public service commissioner, Simon Pentanu.

The school was built by the islanders to cater for their children at home. Previously they had crossed the Kieta harbor to the mainland schools, particularly to Arawa.

Around 2000 the school began formal classes and in 2013 it had graduated five Grade 8 classes.

The school caters for children from the main Pokpok village, which faces the Kieta harbor, and Sisirai, the second largest village on Pokpok, which is open to the Solomon Sea.

Children from the Sipaa village, on the mainland, paddle their tiny canoes out of their position on the Pidia Peninsula to Uruna, for schooling.

Uruna Primary School has a technique to keep the school operational when a cohort is short of students in a particular year.

For instance, some years the school goes without a Grade 8 class; awaiting a class to complete Grades 6 and 7, before they can have a Grade 8.

This is exactly what is happening this year, 2014. In 2013, Uruna graduated a Grade 8 class and most of its students now attend Arawa Secondary School for Grade 9. As a result Uruna will not have a Grade 8 class until 2015, due to a lack of students.

This is a system most schools are using across Bougainville.

Uruna Primary School is a paradise little concave dell covered in virgin island jungle. It has a little stream that supplies it with water and halting the dell is the fine sandy beach stretching calmly to the northeast towards Tausina Island, a peaceful neighbour of Pokpok Island.

To the northwest is the Uruna Point that barricades one’s view of the Kieta Harbor, thus making Uruna hamlet and school secure and peaceful for visitors.

Birds sing all day, so teachers and students claim that their school is absolutely a different world within Bougainville.

When in Uruna you cannot remember what you have being doing on the mainland Bougainville—you are locked in the heaven of Uruna.

Many visitors claim the school should establish its own tourism project, be financially independent and advance more.