Culture is the main catalyst for unity amongst  Bougainvilleans. 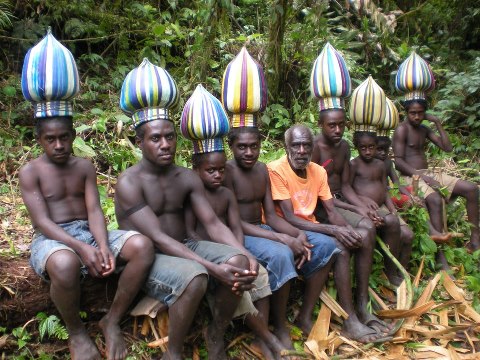 Above: March 2013 Young Rotokas boys initiated into the Upei

It varies region-wide and has significant similarities that  suggest a common migratory history.

Bougainville is mostly matrilineal with a minority of  scattered patrilyneal communities in the Southern Region of Bougainville.

Clanship arrangements are unarguable the Eagles Clan (Manu),  Roosters (Nakarip) and the Dogs (Nakas). Other clans of the likes are Hornbills  (Kokomo), Cockatoos and others are defectors of the three main clans.

Chieftainship of a clan is chronologically inherited from  women chiefs while the men provide patronage.

The Clan’s male Chiefs always  make decisions harmoniously with the intention to protect the integrity of the  women who are the owners of land, property and traditional landmarks,  hunting/fishing zones.

There exist three chiefs in a clan, one being the decision  maker, the other being the warrior and the last as the messenger.

Barter system is still being practiced in most remote parts  of the region.

Featured on  the provincial flag is a tall hat, known as Upei. The Upei is a  headdress worn by young men at their  initiation and marriage ceremonies.