SOMETIMES the simplest idea can make the biggest difference. 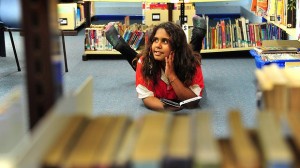 Canberra bureaucrat Daniel Billing is all too familiar with the stark gap in  literacy achievement between indigenous and non-indigenous students across  Australia as he spends his working week specialising in student engagement and  indigenous education within the federal Education Department.

But three years ago, the purchase of a  Kindle sparked an idea for  a simple  and cheap way to try and reduce that gap. Noticing how his then seven-year-old  intuitively and enthusiastically took to the electronic reading device, Mr  Billing came up with a plan to fund Kindles for indigenous students in an effort  to boost their interest in reading.

”Kids love technology and they are innately drawn to it. Kindles are also  relatively cheap to buy at around $200, so you can exploit a cheap technology to  encourage kids to read no matter where they are in the country,” he said.  ”Certainly in the more remote parts of Australia it’s cheaper to send a Kindle  than ship in books.”

But Mr Billing’s plan had a twist. As a condition of receiving a Kindle,  students committed to measurably improving their reading and comprehension. If  they succeeded, they kept the Kindle as a reward. If they didn’t, the Kindle was  returned just like a library book.

Gathering a small band of friends and supporters, Mr Billing founded the  Indigenous Reading Project which this year sent out 20 Kindles to students from  as far afield as Canberra to far north Queensland.

When the ACT’s only participant, Forrest Primary School sixth-grader Yulcaila  Hoolihan-Mongta, received her Kindle earlier this year, the 11-year-old had a  reading age of nine, and spent an average of just 45 minutes a week reading.

After 12 weeks with a Kindle, Yulcaila increased her weekly reading to two  hours and 20 minutes and gained about a year’s worth of reading ability, says  teacher Jemma O’Brien.

”Yulcaila has completed over six novels and her confidence when reading  independently has improved. She is proud to be seen reading. She is more willing  to read aloud   … She is developing a real love for children’s literature and is  able to comprehend more difficult text in all areas of the curriculum,” Ms  O’Brien said.

Yulcaila says: ”It’s been pretty good to have it because now I can practise  reading and read a bit faster. The books are really good, too. I think I am  reading more.”

Mr Billing said the project had received 100 applications from across the  country at the start of the year after he wrote to schools with high enrolments  of indigenous students.

Students were chosen based on their teacher’s recommendation and needed to be  at or below national benchmarks in literacy, although not so low that they could  not be independent readers. They were measured on fluency and comprehension by  their teachers at the start of the program and  at the end.

Mr Billing said just one student out of the 20 had failed to  keep the  Kindle, and another three had dropped out of the program when they moved to  other communities.

All four Kindles were returned in mint condition.

Children increased their weekly reading time by 154 per cent, while reading  fluency or speed increased by 51 per cent and reading comprehension scores were  up by 43 per cent.

”So often indigenous interventions are expensive and ineffective and in  response to a crisis. So it’s nice to work on something cheap, simple and  successful like this,” Mr Billing said.

”I am just a public servant living in the suburbs and our group of  supporters is tiny, so the challenge is now to take a good idea to the next  level.”

The Indigenous Reading Project is  seeking donations to fund 100 Kindles next  year, and to thoroughly analyse the changes in literacy achievement.